Research in the Keck lab examines the structural mechanisms that drive DNA replication, replication restart, recombination, and repair reactions. Successful execution of these pathways is essential in all cells, and defects in the proteins that facilitate genome maintenance reactions lead to genome instability, cell death, and disease. Our studies combine structural approaches with biochemical and cell biological methods to answer fundamental structure-function questions in genome biology.

Single-stranded DNA-binding proteins. Bacterial single-stranded (ss) DNA-binding proteins (SSBs) play essential protective and organizational roles in genome biology. In their protective functions, SSBs bind and sequester ssDNA intermediates that are formed during genome maintenance reactions. As organizational centers, SSB/ssDNA complexes form dynamic protein-docking “hubs” at which over a dozen different DNA replication, recombination, and repair enzymes gain access to genomic substrates through direct interactions with SSB. This clustering of enzymes is thought to help integrate cellular genome maintenance reactions by facilitating the exchange of ssDNA substrates between DNA replication, recombination, and repair pathways. In all cases examined to date, the last ~6 residues of SSB’s flexible C-terminus (SSB-Ct) form its protein docking site. Eukaryotic SSBs also interact with a diverse array of genome maintenance proteins but, since they lack the SSB-Ct element found in bacterial SSBs, they do so through distinct mechanisms.

We have mapped the SSB-Ct binding sites in several genome maintenance proteins. The examples we have focused on include bacterial proteins involved in DNA replication (chi subunit from the replicative DNA polymerase), recombination (RecQ DNA helicase), and repair (Exonuclease I and Uracil DNA glycosylase). The SSB-docking sites on these proteins are remarkably similar in spite their lack of structural similarity. Binding to SSB often stimulates enzyme activity through recruitment of the protein partner to its SSB/DNA substrate. In cells, these interactions are essential for the proper localization and functions of SSB-associated proteins. 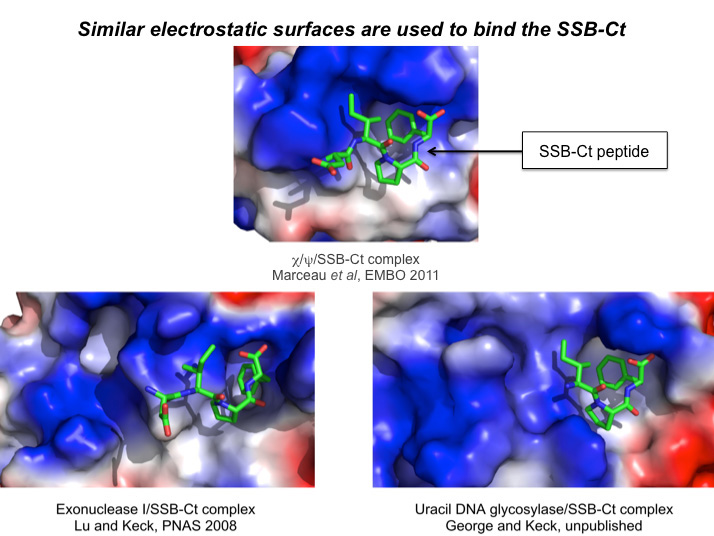 We have developed a model based on work from our group and others that explains the linkage between abandoned replication fork recognition and replisome reloading. In this model, PriA acts as a first-responder protein, binding directly to the abandoned replication fork DNA. Subsequent stepwise assembly of PriB and DnaT or PriC onto the PriA/DNA complex creates a platform for recruiting the replisome on the replication fork. As a step toward understanding the structure of the primosome, we have determined the structures of PriA and PriB and have initiated structural efforts on the remaining replication restart proteins. Our future work will focus on understanding the critical steps in formation of the fully assembled primosome through crystallographic and other structural approaches, along with biochemical and genetic studies. 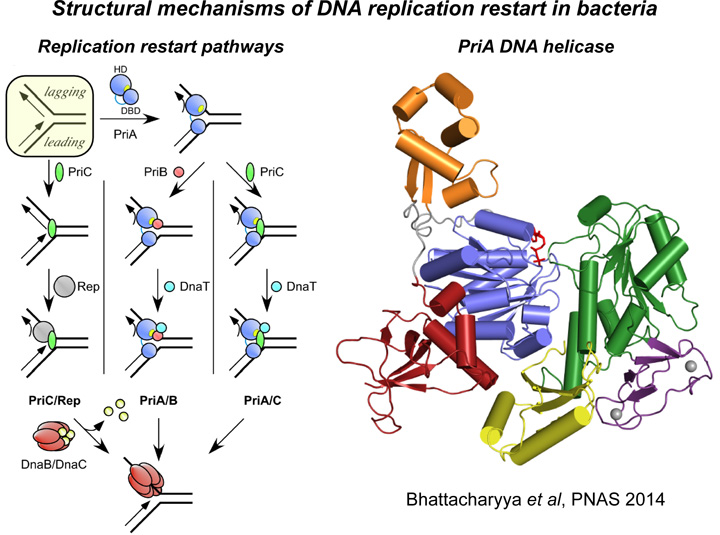 Coordination of human DNA repair complexes. Eukaryotic cells have an astonishing number of DNA repair pathways that are regulated and coordinated, at least in part, by dynamic physical interactions. We have recently begun a study of a key protein interaction interface that links the Fanconi Anemia Core Complex and Bloom Dissolvasome, two DNA repair complexes. Our lab has determined the high-resolution crystal structure of the minimal protein interface that links these complexes, which is comprised of a short peptide from the FANCM protein from the Fanconi Anemia Core Complex binding to the RMI heterodimer from the Bloom Dissolvasome. Using our structure as a guide, we have shown that mutations that block interaction between these complexes induces genomic instability in cells-a hallmark of nearly all cancers. We are continuing to investigate this and other repair interfaces as examples of regulation by dynamic protein assembly and as potential chemotherapeutic targets. 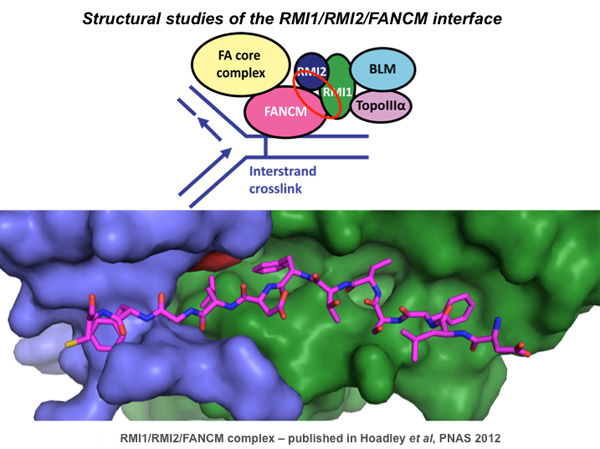