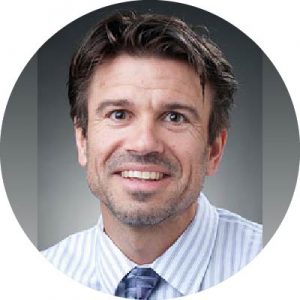 There are currently three major areas of research in the group:

What are the basic biochemical principles that govern epigenetic information written onto histones? Currently, we are addressing the fundamental hypothesis that the combinatorial nature of nucleosomal PTM (post-translational modification) states are specifically recognized and acted upon by enzyme complexes containing multivalent readers. These enzyme-catalyzed histone modifications (e.g. (de)acetylation, (de)phosphorylation, and (de)methylation) result in a unique set of chemical ‘marks’ that regulate chromatin function through largely unknown mechanisms. We and others have proposed that combinatorial posttranslational modifications (PTMs) give rise to a histone ‘code’ or ‘language’, which is interpreted by enzyme complexes to mediate transcriptional responses (e.g., activation or repression). We employ numerous biochemical approaches to investigate the existence of a functional histone code involving enzyme-catalyzed PTMs.

2.) Linking metabolism with the epigenome

Chromatin remodeling enzymes rely on co-enzymes derived from metabolic pathways, suggesting coordination between nuclear events and metabolic networks. Investigations are underway to understand the link between metabolism and the regulation of epigenetic mechanisms. We are testing the hypothesis that certain chromatin modifying complexes have evolved to exquisitely ‘sense’ metabolite levels and respond accordingly, modifying specific chromatin loci for altered gene expression.

Accumulating evidence suggests that reversible protein-lysine is a major regulatory mechanism that controls non-histone protein function. With the recent mass-spectral cataloging of ~1000 acetylation sites on protein lysine residues comes the exciting challenge of assigning functional roles to specific acetylation sites, identifying the acetyltransferases and deacetylases that regulate acetylation levels, and elucidating the physiological cause and effect of specific acetylation. In only a few cases have the acetyltransferases and deacetylases been identified. Also, there is a scarcity of molecular understanding of the functional consequences of reversible protein acetylation. Sirtuins are a conserved family of NAD+-dependent protein deacetylases that have emerged as important players in modulating protein acetylation. Compelling genetic evidence implicates sirtuins in genome maintenance, metabolism, cell survival, and lifespan. The NAD+-dependence suggests that specific protein deacetylation is inextricably linked to metabolism. We are examining the central hypothesis that reversible protein acetylation is a major regulatory mechanism for controlling diverse metabolic processes, and that at the molecular level, site-specific acetylation alters the intrinsic activity of targeted proteins.